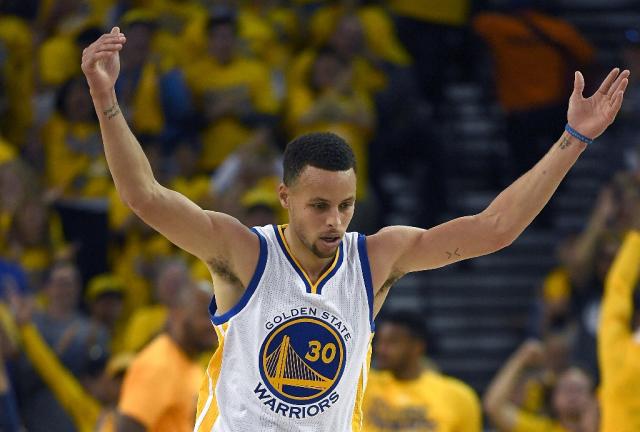 Oakland (United States) (AFP) – Golden State star guard Stephen Curry didn’t practice on Sunday because of a sore right ankle and remains “questionable” for the Warriors’ next playoff game against Houston on Monday.

Golden State coach Steve Kerr said Curry was “doing a little better” on Sunday, a day after he rolled the ankle in the convincing win over the Rockets that opened their NBA Western Conference first-round playoff series.

“He’ll get treatment today, go get some rest, get off his feet, and we’ll do the same thing tomorrow at shootaround and see how he’s feeling,” Kerr said. “We’ll assess whether there’s risk. If there is, we won’t play him.”

Shaun Livingston would start in Curry’s place if the reigning Most Valuable Player can’t play.

Curry had a game-high 24 points on Saturday, including 16 in the first quarter, before twisting his right ankle in the second period.

Curry went to the locker room to get the ankle taped just before halftime, played briefly to start the third quarter, then sat out most of the second half.

“I didn’t like the way he was moving when he went back out in the third quarter,” Kerr said. “He wanted to stay in, but he wasn’t moving well, so we weren’t going to play him, regardless of what happened.”

Ultimately the Warriors didn’t need him. Golden State had built a 65-39 lead by the time he departed in the third quarter and went on to win 104-78.

Curry said after the game he hoped to suit up on Monday for the reigning NBA Champions.

“Right now, don’t see a scenario where I’ll be out,” he said. “Obviously, if it’s not right and I’m at risk of further injury or whatnot, that’s the only thing that we’ll have to worry about. Pain tolerance and all that stuff, I kind of know what I can deal with on the court. But you don’t want anything more serious to happen, favoring an ankle or whatnot.

“So that’s what we’ll kind of pay attention to the next two days.”