Skip to content
You are here
Home > Sports Books > Discover….Killer Instinct – The Trials and Tales of Murderous Sports Stars by James Buttler 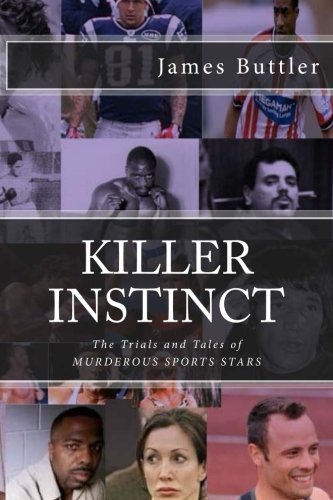 Crime and sport intertwine in ‘Killer Instinct’, a book that chronicles the rise and fall of some of the world’s leading sporting stars. The 29 men and women included have one thing in common, other than their rise to sport’s professional elite, they have all served time in prison for killing another human being. Everyone has heard the name Oscar Pistorius who, in 2013, shot and killed his beautiful model girlfriend Reeva Steenkamp. The South African Paralympic champion is by no means the only sportsman to have swapped the luxurious trappings and adulation of a successful career in sport for the discomfort, disgrace and despair of a jail cell. The sports covered are wide-ranging, the culprits’ geography truly global and although all of their acts led to a tragic death, the crimes are vastly different in nature. Most of the offenders took one life, some more and one man was officially classed a serial killer after confessing to seven murders. Whether you enjoy the true crime genre or like sport this book is for you. Like both and it’s a must read. ‘Killer Instinct’ neatly balances the lives of the sporting heroes covered and the deeds that saw them fall from grace. Every death included is an avoidable tragedy, but readers may well be surprised at their different reactions to each chapter. Many of the killers are undeniably nasty pieces of work and deserve all the negative repercussions. For some, despite their acts, you may feel a tinge of sympathy as there are some very sad tales indeed. Of course a few convicted killers profess their innocence. One or two may well have been harshly treated. But then there is the convicted boxer and self professed Nelson Mandela of sport who was as guilty as they come. From another boxer involved in the Melbourne Gangland Killings to the only Test cricketer hung for murder. From the rugby international who shot his wife to the wrestler that killed his family. From the American footballer who killed for a religious cult to the female bodybuilder who snapped and killed. From the pinup skateboarder to the sumo stablemaster, this book brings you up close and personal with the trials and tales of murderous sports stars.