Skip to content
You are here
Home > Big3 > Big 3 – Who can win the championship?

The Big3 draft was this Sunday, and with the teams set in stone, everything just got a little bit more exciting. Ice Cube’s new basketball league features everything from hand-checking to a 4-point line (where is Antonie Walker when you need him?) and a few current and future hall of famers either playing or coaching. Let’s take a look at how the draft netted out and how good each of these teams could potentially be. 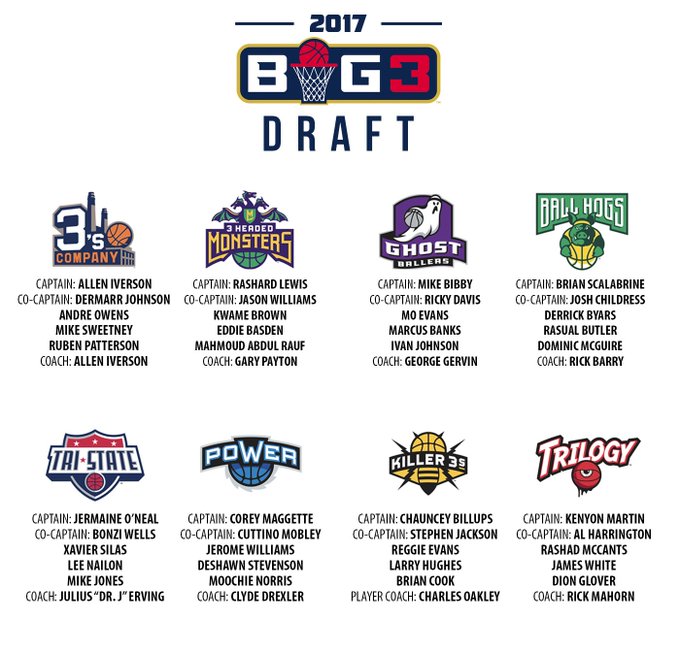 Allen Iverson is easily the league’s biggest name and biggest draw, but as a player and coach, it’s hard to imagine AI’s squad to have the answer to how to come out on top in this league. Demarr Johnson, who kind of flamed out of the NBA is Iverson’s co-captain, and the team drafted Andre Owens, Mike Sweetney and Ruben Patterson. In 3-on-3 pickup ball, it always helps to have a lockdown defender, and that’s what Patterson brings to the table. Overall, 3’s Company might have the most hype heading into the season, but it’ll die down once we see that the construction of this roster isn’t going to be as fun as we want it to be unless AI does that thing where he carries a less-than-stellar team to a championship game.

This is an incredibly old team, but Jason Williams still frequents pick-up games and still looks good doing it. Rashard Lewis has the kind of game that ages well with his ability to shoot the long ball and ability to play back to the basket (only when necessary though). Kwame Brown was a surprise first round draft pick, but you still can’t teach size, and Brown’s presence will be felt much more in half court 3-on-3 games than it would dragging his frame up and down a full NBA-sized court. If you wanted a sleeper pick, this might be the move. They won’t be anyone’s favorites going into the season, but they might have the right kind of team to run (or jog) teams off the court.

Ricky Davis once thought “LeBron James was just another addition to help me score.” And when you think that highly of yourself, that can either be fantastic in a 3-on-3 game or completely detrimental to what you’re trying to accomplish. On the flip side, the team also features Mike Bibby, Mo Evans, Marcus Banks and Ivan Johnson. This is probably the best collection of NBA guys in the league, but still not the favorite to win it all. I think Ivan Johnson will surprise a lot of people, let’s just hope that he doesn’t get kicked out of another league.

They’re called the Ball Hogs but don’t quite have a ball hog. If any team is expected to finish last, it might be this squad here. Rasual Butler is a nice nab, but Brian Scalabrine and Josh Childress is the worst pair of captains, and I don’t think anyone on this team other than Butler has the athleticism and/or willingness to consistently get stops. Any time Scals is on the floor, other teams are going to target his slow feet, and every time Childress is on the floor, there’s one less shooter you have to worry about. Hate to say it, but this is the team that could have used Steve Francis, hell, even Smush Parker.

Tri-State features two original members of the late-90s, early-2000s Trail Blazers. There’s already some chemistry there from the jump, and both guys are awfully physical. Jermaine O’Neal’s game is perfect for 3-on-3 competition and Bonzi Wells, when in his prime, could go out and get buckets with the best of them. Xavier Silas was an excellent grab in the first round. He was fantastic in the NBA’s D-League shooting 40 percent from three and spent a year in the NBA with the 76ers. Tri-State feels like the kind of team that can hold a lead if they have one, but have the kind of guys who can shoot you out of a game if down early, too. Hard to tell where these guys will finish, but it wouldn’t be a surprise to anyone if they’re playing in Vegas.

Corey Maggette and Cuttino Mobley are both the old dude at the park who know all of those little tricks to get under opposing players’ skin and keep the court for a few hours. DeShawn Stevenson will be the verbal version of the two captains wily ways. This team will frustrate everyone they play because some of the buckets will be ugly, some won’t make any sense, but they’re going to keep pouring in with the guys on the roster. Don’t discount Jerome Williams who will play the role of enforcer in a league where there aren’t many. Power has a nice squad that will win quite a few games.

This is by far the most physical team in the whole league. Chauncey Billups was a bully of a point guard, Stephen Jackson is one of the NBA’s all-time goons and Reggie Evans existed solely to get under every other human’s skin. Throw in Brian Cook’s big body with the ability to shoot the 3-ball and Charles Oakley as player-coach, and well, you have yourself quite the squad. More than anyone other than Iverson, fans should be excited to watch a Stephen Jackson who’s allowed to hand check and talk trash. Think of a bigger, stronger, more intimidating Gary Payton pushing around guys past their prime. Stat Jack could fill up the box score in any way you want and defend all three positions. Larry Hughes can carry the scoring load while Billups keeps this wild bunch under control. Barring any injuries, the Killer 3s should be your favorites. And what an appropriate name for this squad.

Kenyon Martin and Al Harrington, if nothing else, won’t back down from the Killer 3s. They have enough dust-ups in their storied careers to earn respect from the best team in the league. But it’s the rest of the team that’s going to keep them from being one of the favorites. Rashad McCants wasn’t what anyone wanted him to be when he left UNC, and James White could never figure out how to do anything other than dunk. There might be some highlights with this squad, and K-Mart and Al Harrington will win them some games just off GP.