Skip to content
You are here
Home > NBA > Behind Klay Thompson’s unstoppable shooting, the Warriors forced a Game 7.

Throughout the Western Conference finals, as you watched the Oklahoma City Thunder push, and press, and suffocate the Golden State Warriors with their superior length and athleticism, you might have found yourself wondering what exactly the Warriors had to do to get back to being the Warriors— what adjustments they could make to turn the tide in a series that seemed to be running away from them with the speed of a Russell Westbrook fast break. At some point in your search, you might have settled on a particularly elegant solution: either Stephen Curry or Klay Thompson will have to go absolutely berserk, and man, it’d sure help Golden State if both of them did.

Thompson scored a career playoff-high 41 points, going 11-for-18 from long range to set a new NBA record for most 3-pointers in a postseason game. Curry scored 20 of his 29 points after halftime, finished one assist shy of a triple-double, and drove the dagger into Oklahoma City’s heart on adriving runner hoisted high over the outstretched arm of Serge Ibaka and banked off glass with 14 seconds left.

The Warriors needed their superstars to play like superstars and the Splash Brothers delivered in spades, dominating the fourth quarter to lead Golden State to a 108-101 Game 6 win that left the fans at Chesapeake Energy Arena absolutely stunned, and sent the Western Conference finals back to the Bay for a winner-take-all Game 7 on Monday night at what promises to be an exceptionally raucous Oracle Arena. 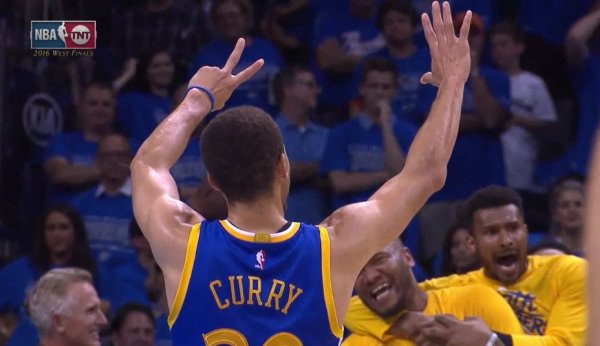 They’re going to sing songs about the shots Klay took — the audacious deep 3s, the 3s fired without a clear line of sight to the rim, with Andre Roberson all over him like cheap cologne, without even really getting possession of the ball.

And they should, because Klay Thompson’s shot-making in Game 6 was the stuff of legend … and his reaction after the game was, too:

With Curry battling injuries earlier this postseason and ineffectiveness at times in this series, Thompson has been Golden State’s rock, the shot-making foundation of their grind to this point. And with his 41-point killer in Game 6, he entered some rarefied postseason air:

Klay Thompson’s 41 pts are the most in a road game when facing elimination since LeBron had 45 pts in Game 6 of 2012 Conf Finals at Boston.

Curry’s second-half resurgence, which came after a scoreless first quarter, has already prompted 10 million “70 percent at best, huh?” sneer-jokes, and will launch 10 million more before Monday. But the plays he made with the game in the balance — the hiccup-quick 25-foot bomb over Kevin Durant‘s impossibly long arms to get Golden State within one with 3:58 remaining, the 26-footer in transition that tied it at 99 with 2:48 left, the shake-up of Ibaka to get the dagger in the air, the steal of Westbrook’s ensuing inbounds to all but ice it — are the kind of plays that helped the Warriors believe, even down 3-1 and down by 13 in Game 6, that they had a chance. With Stephen Curry, you always have a chance … and with his play this postseason, Klay’s earning a spot in that same vaunted category.

The same has long been true for the Thunder, led by stars Westbrook and Durant, and through three quarters, Oklahoma City’s two-man power trip had combined for 45 points. Durant had gotten off to a rough start, missing 13 of his career-high 19 first-half field-goal attempts, but he’d settled in with nine points on five shots in the third, and Westbrook was both making smart decisions with the ball (11 assists with just one turnover) and getting to his spots, either finishing at the rim or pulling up for his“cotton shot” near the elbow. Together, with some aid from Ibaka and important minutes from series-changing wing Roberson and maxed-out sixth man Enes Kanter, it was enough to give Oklahoma City an eight-point lead heading into the final frame.

But Thompson’s triples and poor shot-making by Oklahoma City kept the Warriors within hailing distance early in the fourth, and with 6:33 left in the game, Steve Kerr decided to dance with the date that helped bring the Warriors to a championship and a historic 73-win season: the so-called “Death Lineup” of Curry, Thompson, Iguodala, Harrison Barnes and Draymond Green that redefined small-ball in the NBA, laid waste to the league this year, and got summarily stomped out by Oklahoma City through the first four games of this series.

Kerr trusted it enough to close with it in Golden State’s Game 5 win, and he rolled with it again for what could have been the final 6 1/2 minutes of their season. It paid off handsomely, as the Warriors outscored the Thunder 21-10 down the stretch, with Thompson and Curry taking over while Westbrook and Durant took a nosedive.

Westbrook and Durant went 0-for-4 in the final five minutes while combining for six turnovers that led to 10 Warrior points; all of Westbrook’s miscues came in the final two minutes. They carried the scoring burden for Oklahoma City, with Durant pouring in 29 points to go with seven rebounds, three assists, three blocks and two steals, and Westbrook adding 28 points, 11 assists, nine rebounds and four steals.

But neither could consistently find the touch on Saturday, combining to shoot 20-for-58 from the field, and their late-game struggles helped doom Oklahoma City; not even Billy Donovan’s own hammer lineup, the “small”-ball unit of Durant, Westbrook, Ibaka, Roberson and Dion Waiters, could stem the tide getting outscored by eight points in a pivotal five minutes of floor time. 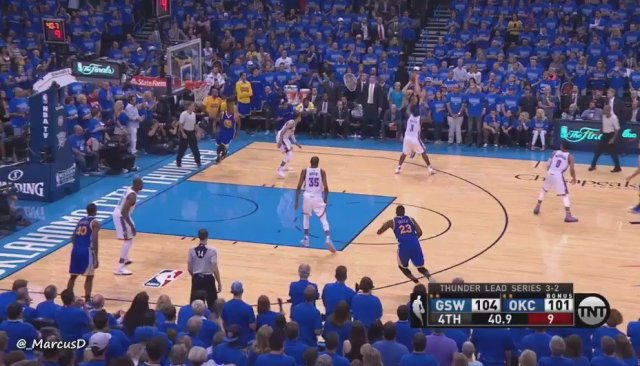 After bouncing back from his mid-series debacle in the second half of Game 5, Green again stuffed the stat sheet and mostly stayed out of trouble, contributing 14 points, 12 rebounds, six assists, three steals and one block. was absolutely massive down the stretch, continuing his game-long trend by playing in-his-jersey defense on Durant and Westbrook while making plays for both himself and others on offense, finishing with eight points, seven rebounds, three steals and an assist. 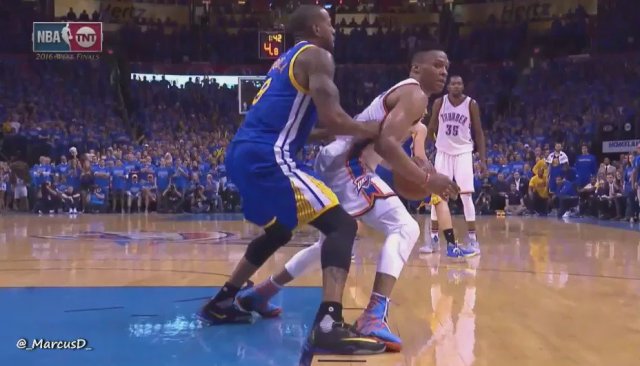 The Warriors shot just 41.4 percent as a team and missed nine free throws, but made up for those deficiencies by shooting a blistering 21-for-44 from 3-point range, tying the franchise record for most 3s in a playoff game that they set one month ago in their Game 4 victory over the Houston Rockets. That included a 12-for-23 clip from distance after halftime, and committing just five turnovers after intermission.

With their shots finally falling and the Thunder seeming out of gas, out of rhythm and out of step en route to a ghastly 3-for-23 finish from 3-point land with 10 missed free throws of their own, Golden State overcame what had been a 13-point deficit with a hellacious closing kick, outscoring Oklahoma City 19-5 over the final 5:09 of the fourth quarter.

Through four games, the Thunder imposed their will on this series, physically dominating the Warriors and earning three shots to secure a fourth and final victory that would return them to the NBA Finals for the first time since 2012. They’ve missed their first two, and they must go back into Oracle and beat a now-rolling and confident 73-win champion on its home court for the right to get back to the promised land.

The stakes are galactic: for the Warriors, the chance to defend their title and cap the greatest regular season in NBA history with a championship; for the Thunder, a chance to prove they too are built of the kind of steel that enables you to rise up after impossible heartbreak and vie for the biggest prize in the sport. Nobody ever said it would be easy; nobody could have predicted it would be quite this much fun. This series so, so richly deserves a Game 7. Let’s cross our fingers and hope that it can live up to this Game 6.