If you don’t already know the name Lamar Jackson, it’s time to get familiar with it.

Jackson, Louisville’s standout quarterback, burst onto the scene in 2015 as a true freshman and steadily improved as the season progressed. He has taken his game to a new level so far in 2016.

The sophomore played just a half in Louisville’s season-opening win over Charlotte, but he racked up 405 total yards (286 passing, 119 rushing) and eight (6 passing, 2 rushing) touchdowns in a 70-14 win. He picked up right where left off Friday night at Syracuse, totaling 483 yards (344 passing, 139 rushing) and five touchdowns (1 passing, 4 rushing) in the first half alone.

Jackson wouldn’t reach the end zone in the second half, but he continued to add yards on to his record-setting night. By the time the dust had settled and Cardinals pulled out the 62-28 win, Jackson (who sat out the final seven minutes of the game) finished with 411 yards passing and 199 yards on the ground — a total of 610 yards, an ACC record. He became the second player in FBS history with 400 passing yards and 150 rushing yards in a game and was just a single rushing yard away from becoming the only player in FBS history to pass for 400 yards and rush for 200 yards in a game. 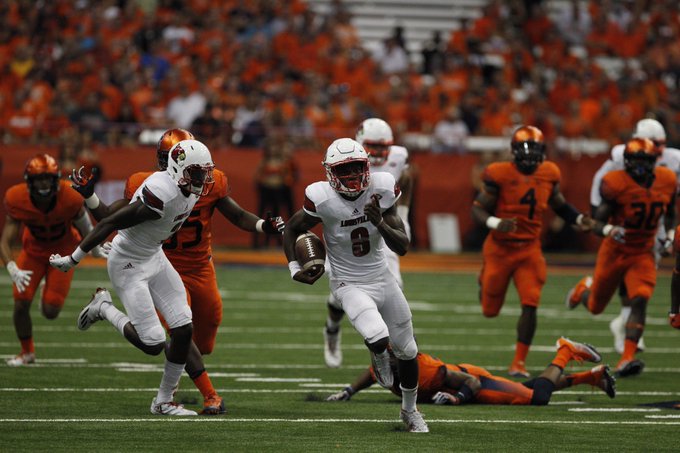 In particular, two of those rushing touchdowns especially showed off Jackson’s electric skillset. Louisville was already up 14-0 a few minutes into the game when Jackson kept on a read option, juked a Syracuse defender out of his shoes and scampered 72 yards to the end zone. 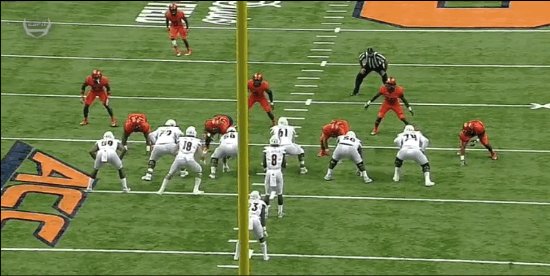 His fifth score of the game was his best one. Jackson completely hurdled over Cuse defensive back Cordell Hudson at the five-yard line and tiptoed across the goal line. 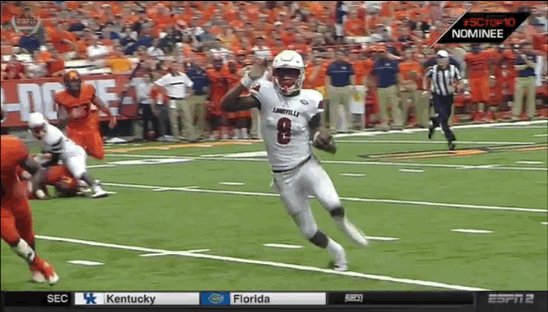 That score gave the Cardinals a 35-7 lead with 3:23 left in the half, but Syracuse responded with two touchdowns before going into the break, cutting the lead to 35-21.

Jackson wouldn’t reach the end zone in the second half, but he continued to add yards on to his record-setting night as the Cardinals pulled away from the overmatched Orange. As a team, the Cardinals finished with a whopping 844 yards of total offense, a program record. And that number could have been even higher if not for a number of drops and turnovers from the offense.

Nonetheless, the dominant performance improved UL’s record to 2-0 headed into next Saturday’s home matchup with No. 3 Florida State. That should be a great one.